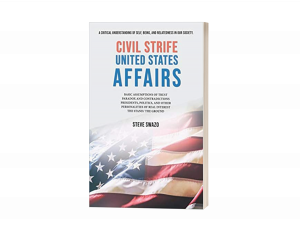 Getting by on wisdom

COOKSTOWN, NEW JERSEY, USA, September 9, 2021 /EINPresswire.com/ — Constant shifting grounds of the human world greatly influence the course of our social lives. Sometimes it can change for the better, sometimes for the worse. Through it, all, requirements to sustain individual social life remain roughly the same for everyone throughout the United States. The cost of maintaining and living beyond mere subsistence can sometimes be very burdensome for any who lives on a marginal income. Some citizens turn to the government welfare system to satisfy their needs—housing being the foremost.

Steve Swazo considers himself a victim of privation among many who fared better in the community with steady and meaningful career employment. His condition of unemployability in many permanent job offers was compensated for by doing all sorts of sporadic casual labor jobs offered by both average citizens and industries going out of business.

The gaps brought about by unemployment were filled with meaningful research to achieve a self-declared goal of significant accomplishment. This goal was to write and publish a book “to defend my sanity,” as Swazo puts it, among stereotype thinking people who dominate the American intellectual scene under which we the people are compelled to live our lives or move in grooves. This book was entitled “We Know Who God Is: Country Free USA,” which was published in 2009.

Since two years of college was not enough to earn or gain a competitive edge in the job market, and given to loathing from the droughts of his inability to secure immediate gainful employment, Swazo continued employing himself doing volumes of research exploring the annals of human civilization, including our own Americanization. A priceless stock of knowledge was gained as a result, which any can attain with a persistent willingness to know was the payoff of this adventure. Another Author of sorts was born.

Unlike “We Know Who God Is,” his other book, “Civil Strife United States Affairs,” surveys the various climates of political action with a critical eye on the nation’s contradictions and unsavory deeds of heroism. It clarifies our oneness as a species and not as different races under the United States Constitution.

The book is a deliberate attempt to rearrange the scattered elements, events, and data upon which we organize and construct our individual and social worlds and their weakness or sturdiness under actual conditions that social life poses and demands of us for living relatively well.

Find out more about Swazo’s endeavors when you buy a copy of Civil Strife United States Affairs today!

Visit the author’s website at www.bookbystevenswazo.com to know more about him and his book.