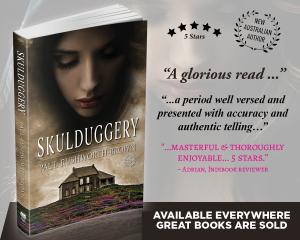 Paul Rushworth-Brown will debut his novel “Skulduggery” which will be available in the US July 4, 2021.

SYDNEY, NSW, AUSTRALIA, July 11, 2021 /EINPresswire.com/ — “This rollicking adventure paints a descriptive picture of the characters and the landscape they fill. You are kept in suspense ’til the final pages with this romantic, mystery, whodunit. ”

Australian historical author Paul Rushworth-Brown will debut his novel “Skulduggery” which will be available in the US July 4, 2021 as part of Shawline Publishing’s historical fiction line. He has appeared on America Tonight with Kate Delaney, the BBC with Sanchez Payne and 2RDJ-FM with Neil Lithgow in Australia.

The novel has already earned acclaim, with one reviewer describing it as “masterful and thoroughly enjoyable. A fascinating and wonderful example of historical fiction and the old-time romance and whodunit really added to the story. Thoroughly researched, it is written in such a way that puts you in the time and place.”

Set on the “Bleak Pennine moors of Yorkshire, a beautiful, harsh place, close to the sky, rugged and rough, no boundaries ‘cept the horizon which in some places went on forever. Green pastures and wayward hills, the colours of ochre, brown and pink in the spring. Green squares divided the land on one side of the lane and on the other. Sheep with thick wool and dark snout dotted the hills and dales. One room, cruck house cottages, scattered, smoke billowing out of some and not others. Dry stone walls dividing and falling, a patchwork of green, green and greener. Long grasses whispered while swaying in the chilled wind waiting for the summer months.”

The story, set on the moors of West Yorkshire, follows wee Thomas and his family shortly after losing his father to consumption.
Times were tough in 1603 and there were shenanigans and skulduggery committed by locals and outsiders alike. Queen Bess has died and King James sits on the throne of England and Scotland.

Thomas Rushworth is now the man of the house being the older of the two boys. He is set to marry Agnes, in an arranged marriage, but a love story develops between them. This rollicking adventure paints a descriptive picture of the characters and the landscape they fill. You are kept in suspense ’til the final pages where one hopes good will triumph over evil.

Paul was educated at Charles Sturt University in New South Wales, Australia. He became a writer in 2015 when he embarked on a six-month project to produce a written family history for his children, Rachael, Christopher and Hayley.

This four hundred page book traced his family’s ancestry back to Haworth, Yorkshire where his ancestors had been living as copyholders or peasant farmers since 1590. His Great Grandfather James Rushworth Ist was a carpenter and the first to move away from the dales in the mid-1800s with his wife and nine children. Through this research, he developed a passion for writing and “Skulduggery” and the soon to be released “Winter of Red” is a continuation of this.