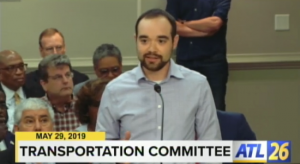 Nathan Clubb received the highest rating of “Excellent” from the Committee for a Better Atlanta. He was the only District 1 candidate to receive such a rating.

Nathan takes the time to deeply understand our district’s problems so he can address the root causes.”
— Paul Bolster

ATLANTA, GA, USA, October 5, 2021 /EINPresswire.com/ — Atlanta city council candidate Nathan Clubb received the highest rating of “Excellent” from the Committee for a Better Atlanta (CBA). He was the only candidate for District 1 to receive such a rating.

The CBA is a nonpartisan business coalition that assesses mayoral and city council candidates’ understanding and commitment to key issues facing the Atlanta community. The election is on November 2.

“I am both humbled and excited to earn the highest score from the CBA,” said Clubb. “Voters tell me that public safety, affordable housing, transportation and ethics matter to them. They also matter to me.”

Clubb, a performance auditor for the state of Georgia, is well-known to District 1 residents for his tenure as president of South Atlantans for Neighborhood Development (SAND). He successfully fought for the protected trail for cyclists and pedestrians to cross I-20 at Bill Kennedy Way, among other accomplishments.

“When I saw the rankings, I was thrilled for Nathan but not at all surprised,” said former Georgia House Representative and District 1 resident Paul Bolster. “Nathan takes the time to deeply understand our district’s problems so he can address the root causes.”

The CBA’s scores are based on written questionnaires and in-person interviews, covering topics including: public safety, economic development and recovery, ethics/transparency, city leadership, transportation, and affordable housing and sustainability.

“I’ve seen what works and what doesn’t work in City Hall. My experience as an advocate, auditor and community leader uniquely qualifies me to root out corruption and deliver meaningful change to District 1,” added Clubb.

Clubb is a homeowner in Ormewood Park, where he lives with his wife Victoria and daughter Abigail. For more information about Clubb and his campaign, visit www.nathanclubb.com.