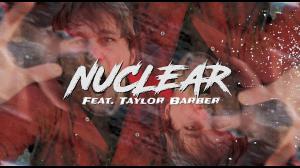 One of the most hard hitting Electronic Hip-Hop songs of the decade. JLM brings the heat with his 4th release, “Nuclear”.

ATLANTA, GA, UNITED STATES, August 6, 2021 /EINPresswire.com/ — Singer, songwriter and producer JLM releases his 4th single entitled “Nuclear” (feat. Taylor Barber), which is out now along with the music video. “Nuclear” brings the heat with it’s mash up vibes of electronic and hip hop, with a dash of hard hitting electronic metal/dubstep. Unexpected feat. Taylor Barber, who is most known for his metal band “Left To Suffer”, leaves listeners in shock after hearing how he transforms this track from 0-60, all with one scream. This track pushes genre boundaries and is a fresh switch-up of what people are currently listening to on a day to day basis. JLM’s music is a perfect blend of chill, rock, hip-hop and dubstep/metal vibes. “Nuclear” was originally written by JLM but was co-produced by Tyler Kimberly. The song is now available now on all digital streaming services.

From being buried alive to being hung upside to shaving his head, JLM is always trying to push each music videos boundaries on how we entertain our fans. The music video for “Nuclear” depicts the meaning behind an artist and the what needs to be done in order to make it into this industry.

JLM says “In order to make it as an artist, you can’t just drop a stone into the pond and expect it to make a big splash. Think bigger. You almost have to drop a nuclear bomb, to shock and entertain your audiences, and that’s what I’m doing with the song “Nuclear”. Who else can say they had a death metal vocalist on a electronic track?”

JLM has been releasing hit after hit, with his latest single “Addicted”, which debuted last month and has already reached over 10,000 listeners. Don’t be late for JLM’s “Nuclear” release, which releases Friday, August 6th.