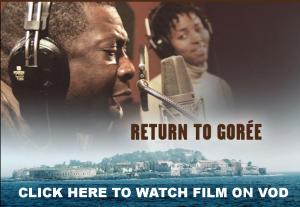 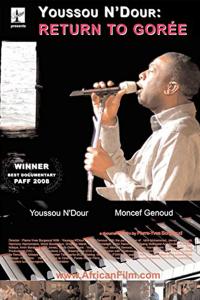 Trace[s] influences and celebrate[s] connections with tunes to make you tap and sway.”
— New York Times

ArtMattan Films, the film distribution arm of ArtMattan Productions, has announced the virtual theatrical release of musical documentary YOUSSOU N’DOUR: RETURN TO GOREE by Pierre-Yves Borgeaud in celebration of Black Music Month. Tickets will be available at artmattanfilms.com.

A musical road movie, Youssou N’Dour: Return to Gorée follows Senegalese singer Youssou N’Dour’s historical journey tracing the trail left by enslaved Africans and the jazz music they created. Youssou N’Dour’s challenge is to bring back to Africa a jazz repertoire of his own songs to perform a concert in Gorée, the island that today symbolizes the slave trade and stands to honor its victims.

From Atlanta to New Orleans with stops in New York to Bordeaux and Luxembourg, the songs are transformed, immersed in jazz and gospel. Transcending cultural divisions and rehearsing with of some of the world’s most exceptional musicians, Youssou N’Dour is preparing to return to Africa for the final concert…

” Conversations full of memorable words and what can only be called ‘genuineness’ push Youssou N’Dour: Return to Gorée into the realm of unforgettable filmmaking.” ~ Jonathan Curiel, San Francisco Chronicle

“It provides ample moments for reflection — and maybe, judging by the reactions of the American musicians who go back home in this film, a little bit of healing, too.” ~ Mike Scott, Times-Picayune

“A wondrous trip with Africa’s greatest singer as he bonds with his musical brethren in the New World.” ~ Louis Proyect, rec.arts.movies.reviews

ABOUT ARTMATTAN FILMS
ArtMattan Films celebrates in 2021 twenty nine years of exposing US audiences to a large variety of films about the human experience of people of color in many parts of the world. Films released by ArtMattan Films include Kirikou and the Sorceress, The Tracker, Gospel Hill, Scheherazade, Tell Me a Story, The Pirogue, Tango Negro: The African Roots of Tango, White Lies, The Man Who Mends Women, The Citizen, Mama Africa: Miriam Makeba and most recently The Last Tree, Made in Bangladesh and Marighella. More info at www.AfricanFilm.com