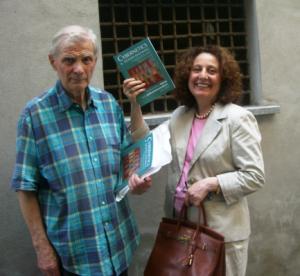 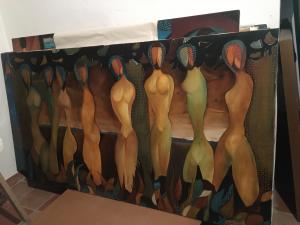 NEW YORK, USA, August 31, 2021 /EINPresswire.com/ — Artists Ruffo Caselli and Ingo Swann had similar ideas about the universe expressed in their art, although the two never met despite having paintings displayed blocks from each other in New York City. Both painters believed that humans were bioengineered and we are not alone in the universe.

According to the International Remote Viewers Association, Swann is a remote viewer, a perpetual discipline for gaining information not available to the ordinary senses. Caselli and Swann were dedicated to exploring consciousness outside of the limits of time and space to better understand the interconnection between personal inner space and the outer space, without polarity grip. The painters believed interconnectedness is part of the universal consciousness extending beyond the body to the universe.

Known as the Father of Cybernetic Existentialism, Caselli was born in Florence, Italy, in 1932 and passed away in Ovada, Italy, in 2020. He began painting in the 1950s with oil on canvas and quickly became one of the foremost interpreters of the changes during his lifetime. His work featured elegant robots, sensors and microchips as he looked for answers in a technological universe.

Swann is known as the father of Remote Viewing. He was born in Telluride, Colorado, in 1933 and passed away in New York City in 2013. He co-created remote viewing experiments with the U.S. Army and the CIA in Project Stargate in collaboration with the Stanford Research Institute. The project was the basis for the movie “The Men Who Stare at Goats.” The artist gained respect as a pioneer of the out-of-body experience.

Swann painted with oil on canvas, for the most part. His paintings express his passion for exploring the mysteries of the universe and recapturing scenes from remote viewing. In addition to painting, he was an artist, musician and writer.