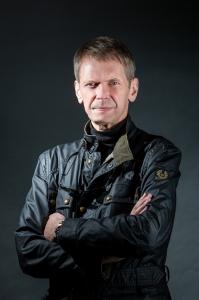 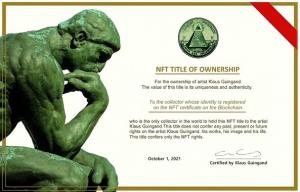 UK, October 19, 2021 /EINPresswire.com/ — NFTs, or non-fungible tokens, have breathed new life into the way art is sold, collected and valued. NFTs potential for the art world has been clearly demonstrated earlier the year when digital artist Beeple made headlines, selling an NFT for $69 million, smashing records in the process. In a similar vein, Deadmau5 graced headlines with his announcement of the release of a second blockchain card collection during August of this year. Deadmau5 originally made headlines earlier the year with limited edition NFT tokens that was made available for Blankos Block Part. The initial sales of the Deadmau5 tokens reportedly topped $240,000, selling out in the first five minutes, whereas the remainder sold out in under 20 minutes.

For the uninitiated, NFTs are tokenized versions of assets that can be traded on blockchain. These assets are unique and can’t be exchanged for similar assets. This uniqueness has now attracted renowned French artist Klaus Guingand.

QUESTIONING THE VERY MEANING OF ART: KLAUS GUINGAND
Redefining the very concept of art, this cultivated and unconventional artist fearlessly approaches various subjects such as truth, humanity, reality, power, death, our fears, time and even art itself. Klaus is best known for his immortalization of the shadows of 200 celebrities, who posed for and co-authored the works, as Leonardo DiCaprio, Jasper John, Kate Moss, Stephen Spielberg, Iggy Pop, Yayoi Kusama, Helmut Newton.. are but a small handful of names who became part of the “Shadows” collection. In a 1995 exhibition at the Louvre in Paris, Klaus sold 100 of his Shadows paintings at auction in support of the fight against HIV and AIDS.

True to his pioneering nature the artist went on to create a global work of art during 2015, titled: Art Warning the World. The work defends freedom and features 200 artists living in 200 countries of the world. The work is translated into 137 national languages and written on the 200 flags of the 200 countries representing these artists. It is estimated that over 11 million people have viewed this work to date.

Other notable works by the artist include his 2018 textile creation in homage to Hollywood’s Legendary Hotel: Chateau Marmont Bomber Jacket. “This jacket is like a passing dream, a hallucination and finally a frustration. I give you the secret of this creation. Inside this jacket, a sound system diffuses the heartbeat of my wife’s” – Klaus Guingand.

For his creations Klaus uses all existing techniques and media and his work has been described as prophetic or cynical in nature as the deeper meaning of his works can be found in the exposure of criticism and truth.

AN NFT VALUED AT ONE MILLION DOLLARS
Klaus Guingand will be placing himself on auction in the form of an exclusive NFT Title of Ownership. The established value? One million dollars, or 292 ETH. This unique piece of art features the likeness of the famous bronze sculpture, The Thinker, by Auguste Rodin. At face value the piece resembles an ownership deed, however at closer inspection this unique piece encapsulates the unique spirit of Klaus Guingand and the art he stands for. The collector who purchases this title will have indisputable proof that they are the only person in the world to “own” an artist.

The auction will also include two NFT videos, one of the artist’s heartbeat and another of his first dream. Thirty seven NFT photos of Klaus Guingand’s most recent echocardiogram will also be included. “These NFTs are the foundation of a story I’ll be telling with NFTs,” Klaus stated.

WHEN AND WHERE
The auction is set to take place on October 21st, 2021, and will last 10 days. The location? OpenSea, the largest NFT marketplace.

Interested parties and art connoisseurs can learn more about Klaus Guingand and his extraordinary works by visiting his website.