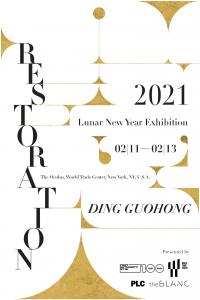 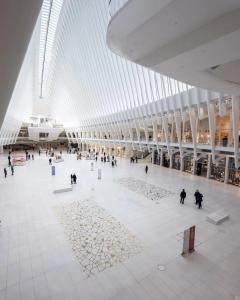 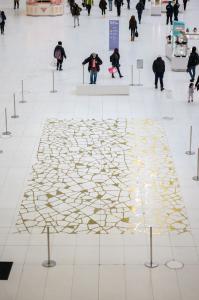 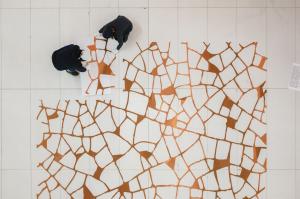 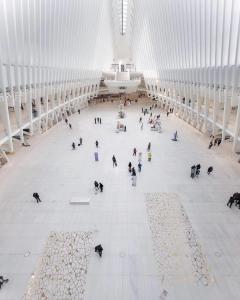 NEW YORK, NEW YORK, UNITED STATES, February 19, 2021 /EINPresswire.com/ — Chinese artist, Ding Guohong, is announcing the success of his breathtaking exhibit, Restoration, which showcases the traditional restoration technique of Jin Shan. The exhibit was presented by TheBLANC Art Space, in partnership with the Port Authority of New York and New Jersey and PLC Ltd. Inc. on February 11-13th, 2021 at The Oculus, World Trade Center in New York.

Ding Guohong is a painter and researcher who began studying the traditional restoration technique of Jin Shan since 2018. During this time, Ding found peace by delving into these ancient practices for repairing broken objects, implementing his own modern spin, and creating two monumental pieces showcased in his latest exhibit, Restoration.

Restoration is a unique exhibit featuring 200 pieces of golden stainless-steel tile created specifically for the space at The Oculus, World Trade Center. The exhibit is influenced by the traditional Asian technique for repairing broken objects that reveals the beauty in restoration, an apt message for us all as we reflect on the past year.

“The traditional restoration process dates back centuries and aims to repair pottery with a resin made to look like solid gold,” says Jenny Roosevelt, curator of the exhibition. “The process not only fixes the object but also transforms it into something more storied, more distinctive, and more beautiful.”

“I came up with the idea for Restoration last year when I began wondering if our souls could also be healed in a similar process – if our world could someday emerge as a better place than it was before the pandemic,” Ding says.

With this visionary mindset, Ding retreated to his studio in the Jiangnan region of China, just south of the Yangtze River, near a quiet lake and surrounded by lush greenery. There, Ding contemplated the patterns found in the finest Jinshan and began to imagine a fresh beginning for them. Ding immediately knew he wanted to create something new and, over the next three months, he made more than 200 stainless-steel tiles, each with its own design inspired by the golden lines of Jinshan. He finished the tiles in gold matte and joined them together to form the two pieces of Restoration.

“Early in this project, we settled on the Oculus space with its striking design and open concept as the ideal setting for Restoration,” TheBLANC states. “Both organizer and artist are so pleased that hundreds of people from all walks of life were able to see the work, pause, and reflect. May Restoration help give us all a fresh start.”

For more information about Restoration, please visit http://www.theblanc.art/ or http://www.officialworldtradecenter.com/lunar2021

Ding Guohong uses the sensitivity and wisdom of a contemporary artist to continuously activate the ancient genes dormant in Eastern culture. He converts Jin Shan, an ancient restoration technique derived from Eastern traditions, into his own creative concept to give it a more metaphorical and symbolic rhetorical meaning.

Jin Shan represents an attitude to face defects with the most precious material and spirit in the world, carefully repairing them, does not try to cover up the defects, and calmly accepts that imperfection is beauty.

Through Jin Shan, Ding gives his own response to today’s world with Oriental thinking and a unique, creative methodological system.