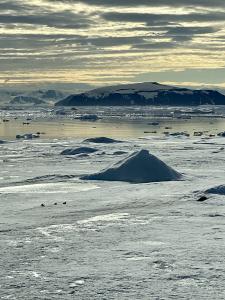 The desolation of a collapsing world 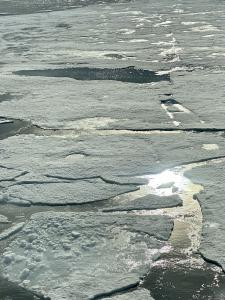 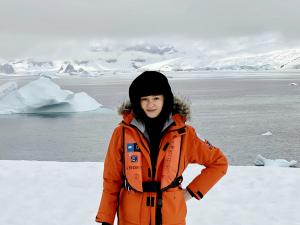 A journey into the abyss”
— Paola Marzotto

MILAN, ITALY, September 12, 2021 /EINPresswire.com/ —
Eye-V Gallery is pleased to announce the exhibit “Antarctica, Melting Beauty” by photographer and Eye-V founder Paola Marzotto, to be held September 15 through 25, 2021, at the Benedetto Marcello Conservatory, scheduled in the official calendar of the Italian Pavilion 2021, “Resilient Community” curated by Alessandro Melis, for the 17th International Architecture Exhibit of the Venice Biennale.

Architect and author Paola Ruotolo curated, and Patrizia Serpe installed, the exhibit of haunting photographs of Argentine Antarctic icebergs and seascapes shot in early 2020 as the current pandemic was starting to spread around the world, which Marzotto presents as an urgent call to action in defense of a collapsing planet.
Marzotto´s images depict the fragmentation of a landscape that until recently had been pictured in its majestic immensity, now through her lens on display as an environmental catastrophe affecting a region that is fundamentally life-sustaining for our Planet. The archipelago of tiny islets set adrift shock us with the beauty and sadness of the melting, once monumental, icebergs.

It is this emotional reaction which Marzotto hopes to bring front and center, to shake a human race that has dissociated itself from Nature to the extent of risking its own survival.

“The journey in search of one’s soul ends here, where space and light coincide, where the end of the world meets the end of the planet. What do we await?” reads in part her manifesto for the series.

Her shock at witnessing the extent of the degradation of one of the most remote corners of the planet has prompted Marzotto to call it “a journey into the abyss” and served as the galvanizing event towards the creation of her venture focused on Nature photography.

Paola Marzotto was born and raised in the province of Venice and on the mountainside of Cortina d’Ampezzo into one of the families who wrote the history of industrial Italy. In her teens she moved to Rome where she studied anthropology and psychology. Growing up immersed in the art world of 1970s Rome, she worked for the Contemporanea Exhibit.

Marzotto begun her working life as a freelance photo-reporter for different agencies and magazines in Italy, later becoming an author, TV journalist and producer. She subsequently ventured into haute couture and design. Currently Marzotto is devoted to environmental activism through art and puts forth her work and worldview under the hashtag BetterEarththanMars, stressing the urgency of resuming our connection with Nature.

Eye-V Gallery was created in 2021 focused on neo-naturalist photography, hosting an international community of photographers, and based in Uruguay, Milan and New York. Eye-V is global and associative, organizing shows and cultural events throughout the world in various settings ranging from galleries, online as well as brick-and-mortar, to museums and art biennials.