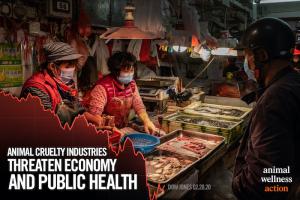 COVID-19 is the most recent in a long line of epidemics caused by disease that have jumped the species barrier from wildlife to humans.

We were thrilled with the robust, bipartisan support the bill received last year and we’re committed to building on that momentum to see this bill become law.”
— Marty Irby

WASHINGTON, DC, UNITED STATES, January 4, 2021 /EINPresswire.com/ — Today, U.S. Reps. Mike Quigley, D-Illinois, and Fred Upton, R-Michigan, re-introduced the Preventing Future Pandemics Act, which would direct the U.S. Department of State to work with international partners to shutter commercial wildlife markets, end the trade of live wildlife, end the import, export, and sale of live wildlife for human consumption in the United States, and phase out demand for wildlife as a food source. The bill, H.R. 8433 in the 116th Congress, rapidly gained 150 cosponsors after its introduction in September 2020. The Senate companion bill is set to be re-introduced in the Upper Chamber by U.S. Senators Cory Booker, D-New Jersey, and John Cornyn, R-Texas in the coming weeks and also enjoys broad bipartisan support.

COVID-19 is just the latest in a long line of zoonotic epidemics, joining SARS, MERS, Ebola, HIV/AIDS, and many others as pathogens that initially emerged from wildlife, making the jump to people directly or indirectly through activities such as the butchering or eating of wild animals.

“COVID-19 was a preventable catastrophe, with a global economic impact exceeding $20 trillion and counting,” said Wayne Pacelle, president at Animal Wellness Action and the Center for a Humane Economy. “Good public policy prevents calamities like the one we’ve endured for the last year, and that’s what this legislation does by taking aim at live-wildlife markets in the U.S. and abroad. Enacting this measure should be a top priority for this Congress since we cannot endure one more pandemic spawned by a live wildlife market.”

“We applaud Reps. Mike Quigley and Fred Upton for their tremendous work to shutter the ghastly wet markets that continue to serve as incubators for plagues like COVID-19,” Marty Irby, executive director at Animal Wellness Action who was named as one of The Hill’s Top Lobbyists for 2020. “The pandemic we face today has clearly proven that live animal markets filled with bats, pangolins, and other exotic creatures must be eradicated not only for the well-being of animals but for the safety and security of the human race and global economy.”

“For the sake of our health, our economy, and our livelihoods, preventing the next pandemic before it starts is perhaps the most important thing we must do. For that reason, Representative Upton and I re-introduced the Preventing Future Pandemics Act at the very first opportunity on the day the new congress is sworn in,” said Rep. Mike Quigley, D-Illinois. “We were thrilled with the robust, bipartisan support the bill received last year and we’re committed to building on that momentum to see this bill become law.”

The bill, which aims to break down the silos between conservation and public health is supported by Animal Wellness Action, the Animal Wellness Foundation, the Center for a Humane Economy, and the American Horse Protection Society to name a few. These groups also supported a resolution introduced by Rep. Steve Chabot in the 116th Congress that also called for the closure of wildlife markets around the globe.

Components of the Preventing Future Pandemics Act of 2021:

• Establishes the official foreign policy of the United States to work with state and non-state partners to shut down commercial wildlife markets, end the trade in terrestrial wildlife for human consumption, and build international coalitions to reduce the demand for wildlife as food, recognizing that there are still rural communities around the world that lack adequate alternative food sources.

• Gives the State Department a wide variety of tools, including economic and diplomatic penalties, to crack down on wildlife markets and the global wildlife trade for human consumption.

• Prohibits the import, export, and sale of live wildlife in the United States for purposes of human consumption as food or medicine.

The full text of the bill can be found HERE.

Animal Wellness Action is a Washington, D.C.-based 501(c)(4) organization with a mission of helping animals by promoting legal standards forbidding cruelty. We champion causes that alleviate the suffering of companion animals, farm animals, and wildlife. We advocate for policies to stop dogfighting and cockfighting and other forms of malicious cruelty and to confront factory farming and other systemic forms of animal exploitation. To prevent cruelty, we promote enacting good public policies, and we work to enforce those policies. To enact good laws, we must elect good lawmakers, and that’s why we remind voters which candidates care about our issues and which ones don’t. We believe helping animals helps us all.

The Animal Wellness Foundation is a Los Angeles-based private charitable organization with a mission of helping animals by making veterinary care available to everyone with a pet, regardless of economic ability. We organize rescue efforts and medical services for dogs and cats in need and help homeless pets find a loving caregiver. We are advocates for getting veterinarians to the front lines of the animal welfare movement; promoting responsible pet ownership; and vaccinating animals against infectious diseases such as distemper. We also support policies that prevent animal cruelty and that alleviate suffering. We believe helping animals helps us all.

Orthopedic Braces And Support Devices And Equipment Market Trends, Strategies, And Opportunities In The Market 2021-30