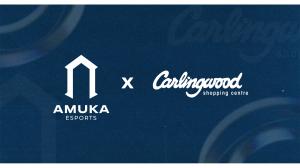 It’s time to level up Ottawa!

…now with Carlingwood Shopping Centre as a partner, we can create an amazing esports experience for Ottawa’s gaming community”
— Ben Feferman, CEO of Amuka Esports

TORONTO/OTTAWA, ON, CANADA, October 5, 2021 /EINPresswire.com/ — Amuka Esports, Canada’s leader in gaming venues, is pleased to announce a strategic partnership with Carlingwood Shopping Centre (“Carlingwood”) to bring an esports and gaming venue to the enclosed shopping centre in Ottawa, Ontario.

The 2,500 sq.ft. location, equipped with 20 state-of-the art PCs, consoles, and mobile gaming stations as well as dedicated streaming zones, will open at Carlingwood in Q4 2021. This location will also host various esports tournaments organized by local operators in Ottawa.

“We have wanted to open a location in Ottawa for several years, and now with Carlingwood Shopping Centre as a partner, we can create an amazing esports experience for Ottawa’s gaming community,” according to Ben Feferman, CEO of Amuka Esports.

With the reemergence of retail, the team at Carlingwood has been working vigorously to create experiences within the centre that will connect the community post pandemic and attract a variety of demographic groups. Introducing an esports and gaming venue will complement the other engagement-focused amenities launching at the centre over the remainder of the year.

Newly managed by Strathallen Property Management Inc. (“Strathallen”), there is potential for Carlingwood to be the first of several other esports and gaming venues at Strathallen-managed properties. Amuka Esports also operates venues in Toronto and Windsor and is expanding to Florida in 2022.

About Amuka Esports
Amuka Esports is a diversified esports company focusing on teams, tournaments, content, and venues. We create localized hubs in cities across North America, each consisting of a venue, tournament organizer, content team, merchandise brands, and incubator. Amuka also operates Canada’s largest esports venue along with several teams based in North America and Europe. Learn more about our impact on the North American esports scene at our official website and on our Twitter, Instagram, and Facebook.

About Strathallen
Founded in 2003, Strathallen is a leading real estate Investment Manager focused on delivering superior risk-adjusted returns to its Investor Partners. Strathallen is led by a team of executives with a proven track record of over 250 years of collective real estate experience. Strathallen is a fully integrated firm providing Asset Management, Property Management and strategic advisory services that allows us to continually create value for our Investors. Strathallen is an employee-owned private company. Learn more by visiting www.strathallen.com, or following us on LinkedIn.