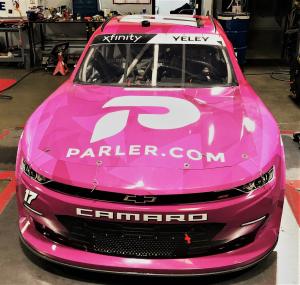 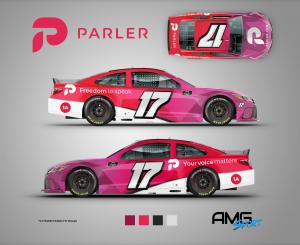 AMGsport designed the Parler No. 17 Car for this weekends NASCAR Xfinity race.

AMGsport, a division of America Media Group, is located in Ybor City in downtown Tampa, FL.

One of the most important aspects in aligning companies with sports and talent is the ability to convey an authentic message and reflect the values of the sponsor.”
— Charles Broadhurst

The underdog social media company has become prominent in the wake of changes in big tech policy influenced by various special-interest groups. The World’s Town Square, as Parler is known, is built upon a foundation of respect for privacy and personal data, free speech, free markets, and ethical, transparent corporate policy.

Charles Broadhurst, President of American Media Group who put the deal together, said, “NASCAR and the Xfinity series are a great fit for the Parler brand. The Xfinity series is ‘the place where names are made’ and that mirrors Parler in so many ways. NASCAR has always been an authentic brand and with the growth and diversity we are seeing now, Parler is a perfect social media outlet for fans and drivers to utilize to get their message out.

“One of the most important aspects in aligning companies with sports and talent is the ability to convey an authentic message and reflect the values of the sponsor. In this case we felt strongly that NASCAR and JJ Yeley reflect the values of millions of Parler users and free speech advocates.

“I don’t think it’s a risky decision to align with a company like Parler, especially in the wake of last month’s congressional hearings that found no wrongdoing in connection with the unfortunate events of January 6th. In fact, I hope that it demonstrates our willingness to stand by our clients and do the right thing and we invite other similar organizations to stand up and let their voices be heard and hopefully we will be the ones to help them do it.”

NASCAR driver JJ Yeley had this to say about his newest partner, “I’m really looking forward to growing the relationship with Parler; the Parler team has been very supportive and it’s always a benefit when you have companies like AMG and SS GreenLight involved throughout the process. I think Parler echoes the sentiment of a lot of NASCAR fans and myself, that free speech and the ability to have open conversation on or offline without fear of being attacked is an important part of this country.”

About American Media Group (AMG) – Located in Tampa, our growing firm delivers turnkey Advertising, Marketing, and Public Relations solutions for well-known global brands and SMBs across a wide spectrum of verticals. AMG staff have decades of experience delivering for clients and ensuring each brand or business is matched with an advertising partner who will deliver on their word. Find them at https://amgsport.com/