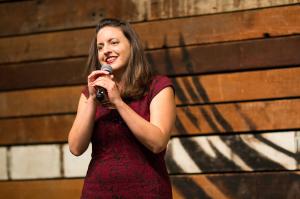 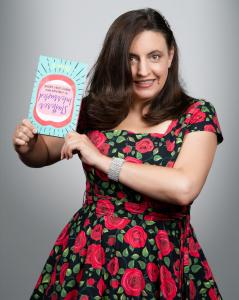 Nina G is a professional speaker and the author of the renowned book, ‘Stutterer Interrupted.’

OAKLAND, CALIFORNIA, UNITED STATES, October 13, 2021 /EINPresswire.com/ — American Comedian and author, Nina G, is pleased to announce she will be lending her powerful voice to the British Stammering Society (STAMMA) for their upcoming awareness campaign.

Hailing from San Francisco Bay, Nina G is a well-respected female stuttering stand-up comedian, disability activist, and author of the memoir Stutterer Interrupted: The Comedian Who Almost Didn’t Happen. She utilizes her humor to help audiences, whether they be at night clubs, colleges, or companies, to confront and understand issues such as disability and equity and has made it her life mission to connect with and impact as many people as possible in her endeavors. Additionally, Nina’s goal is to challenge how people think about stuttering and disability through humor and stand-up comedy – something she has done throughout her own personal journey and in her work with the comedy troupe, The Comedians with Disabilities Act.

In her most exciting news to date, Nina G will be taking part in a public awareness campaign for STAMMA, alongside comedian Marc Winksi – both of whom stammer and who are loved for their online comedy and social media presence. The campaign, dubbed #IStammerToo, will showcase video shorts of Nina and Marc to not only help raise awareness about stammering, but also to portray stammering in the media – something that is lacking by eleven major media agencies in the world.

“Worldwide, more than 70 million people stutter, yet we rarely see them portrayed in the movies or on TV,” says Nina. “Because the media hasn’t done its part to help normalize stammering, many who stutter experience discrimination in their jobs and personal lives – myself included. Through the STAMMA awareness campaign, my goal is to reduce the stigma associated with stammering (as the call stuttering in the UK), bring light to this issue in a heartfelt and funny way, and to advocate for those who have yet to find their voice. I’m very thankful to have been able to work with Marc on this project, who is a TikTok sensation and an amazingly talented actor and advocate.”

When she isn’t performing at comedy clubs like the San Francisco Punchline or Laugh Factory, Nina G is playing colleges and presenting as an international keynote speaker. Nina is part of the comedy troupe, The Comedians with Disabilities Act, which brings laughter and awareness to audiences of all ages across the country.

Nina is the author of her children’s book, Once Upon An Accommodation: A Book About Learning Disabilities, her memoir, Stutterer Interrupted: The Comedian Who Almost Didn’t Happen, is a Huffington Post contributor, has been a TEDx keynote speaker at San Jose State University, and is working on her third book on the history of stand-up comedy in the San Francisco Bay Area.