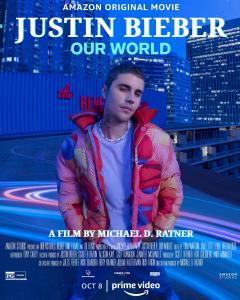 LOS ANGELES, CA, UNITED STATES, October 4, 2021 /EINPresswire.com/ — Justin Bieber: Our World takes viewers backstage, onstage and into the private world of the global superstar as he prepares for a record-breaking New Year’s Eve 2020 concert. After a three-year hiatus from a full concert, Bieber delivers an electrifying performance on the rooftop of the Beverly Hilton Hotel for 240 invited guests — and millions of fans across the globe watching via livestream. Produced and directed by award-winning filmmaker Michael D. Ratner, the 94 minute documentary follows Bieber and his team for the month leading up to the show as they rehearse and construct a monumental stage set. The film also captures personal self-shot moments between Bieber and his wife Hailey through the artist’s own lens. Amazon Studios will release JUSTIN BIEBER: OUR WORLD globally on Prime Video October 8th, 2021.