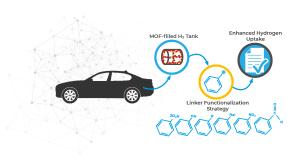 The researchers used a linker functionalization strategy to improve the hydrogen storage profile of MOFs, which have applications in MOF-filled storage tanks for automobiles.

Researchers at the University of Crete and Toyota Motor Europe improved the hydrogen storage profile of MOFs for potential use in hydrogen-powered cars.

MOFs have a huge potential to help us tackle climate change, and it is clear that harnessing knowledge from the wealth of available data can help expedite research.”
— Suzanna Ward, Head of Data and Community, CCDC

CAMBRIDGE, UNITED KINGDOM, October 12, 2021 /EINPresswire.com/ — Researchers at the University of Crete and Toyota Motor Europe improved the hydrogen storage profile of Metal-organic Frameworks (MOFs) as potential materials for use in hydrogen-powered cars and provided a “proof of concept” for the application of machine learning (ML) in MOF design. They recently published their findings in the International Journal of Hydrogen Energy.

What are MOFs and why use them for gas storage?
MOFs are network structures that contain metal clusters coordinated to organic molecules, called ligands. In this study, the ligands are substituted benzene rings. Because they’re usually porous, MOFs are well suited to store gases, like hydrogen. For example, tanks that contain hydrogen bound to MOFs may require lower pressure than tanks that contain just hydrogen. Such tanks have applications in hydrogen-powered vehicles.

Like battery-powered cars, hydrogen-powered cars may help reduce our dependence on fossil fuels. Dr George E. Froudakis is a Professor of Computational Chemistry at the University of Crete and a co-author of the recent paper. He says that mainly it’s the mechanism for energy storage that differentiates conventional electric vehicles and hydrogen-powered vehicles. One has a battery while the other has a hydrogen tank and a fuel cell where the hydrogen is “burned” to produce electricity and water.

“All the other components may be the same,” Prof. Froudakis said. “Towards green transportation, battery technology is mostly targeted to light vehicles, while hydrogen can be applied to heavy and large vehicles, too—like trucks, trains, boats, submarines, etc.”

He says another advantage of hydrogen cars is that refuelling can take place in a few minutes at a hydrogen fueling station. However, this does require hydrogen tanks with sizes that can fit in a car, which is why the industry wants to improve storage performance.

Improving hydrogen storage performance through improved binding energy
The researchers sought to design MOFs with improved hydrogen storage capabilities. They did this by strategically selecting 58 benzene-based functionalized linkers that can be building blocks of MOFs and then calculated the hydrogen-MOF binding energy using computational chemistry techniques. Several of the functionalized MOFs saw an increase in hydrogen interaction strength of 15 to 25%. One saw an improved interaction of 80%. The team then used these findings to train a model through ML to predict binding energy, and it showed good results—even with the limited data from their functionalization efforts. They hope this “proof of concept” ML approach can inform future efforts, potentially saving time and resources on computationally heavy calculations.

Functionalizing the MOFs for hydrogen storage
The researchers functionalized their Isoreticular (IR) MOFs using base structures from MOFs found in the Cambridge Structural Database (CSD).

“We selected three robust well-known MOFs from the first generation of IR-MOFs in order to test our functionalization strategy,” Prof. Froudakis said. “In this way, we wanted to prove that the linker functionalization is vital for obtaining a significant enhancement of the hydrogen uptake in many porous materials like MOFs, Covalent-organic frameworks (COFs), Zeolitic imidazolate frameworks (ZIFs), etc. We expect that this strategy will be followed by other researchers for the synthesis of novel functionalized MOFs with superior hydrogen storage capacities.”

The CSD contains over 100,000 MOF-like frameworks collated together in two enriched and curated subsets.

Suzanna Ward is Head of Data and Community at the Cambridge Crystallographic Data Centre (CCDC), which houses the CSD.

“MOFs have a huge potential to help us tackle climate change, and it is clear that harnessing knowledge from the wealth of available data can help expedite research,” Ward said. “With MOFs on the rise in the CSD, it is certainly exciting to see how this data coupled with Machine Learning could help improve hydrogen storage that could one day lead to greener transportation.”

“At the CCDC we are committed to supporting researchers who use structural data to overcome these real-world problems,” Ward said. “Recent developments make it easier for scientists to utilize knowledge from MOF structures through curated subsets and a MOF collection designed for high-throughput analysis.”

How might Machine Learning help?
Prof. Froudakis and team calculated the binding energies of the functionalized MOFs using ab-initio methods. They hope to potentially limit such computationally heavy approaches in the future by predicting binding energy through ML. Their model, trained with the limited functionalized data in this study, showed promising results. However, a more reliable model will need more data. But how much data does a model need to produce reliable predictions and how much time might be saved?

“This is a very ‘hot’ question that puzzles a lot of the researchers working in the field,” Prof. Froudakis said. “To put down some numbers, the traditional multi-scale computations for a functional group and one MOF can take a CPU time of a month or even more in a typical workstation. On the other hand, if you have a trained ML model the same result can be taken in less than a millisecond! We have done a lot of work paving the road of using machine learning as a robust predicting tool of gas adsorption in MOFs. Nevertheless, it seems that we are still halfway!”

Prof. Froudakis would like to thank his co-workers, Rafaela Maria Giappa for performing the multi-scale calculations, Emmanuel Tylianakis for performing the Monte-Carlo simulations, Marco Di Gennaro for the machine learning analysis and Konstantinos Gkagkas for the extensive discussions and the excellent collaboration that his team has with Toyota Motor Europe.