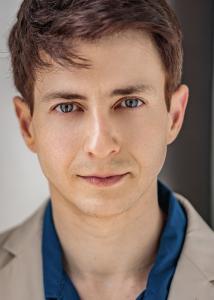 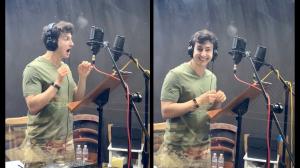 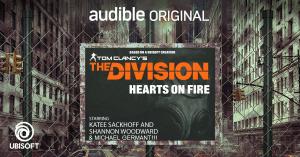 Releasing July 15th on Audible, THE DIVISION: HEARTS ON FIRE follows Hoskins (Katee Sackhoff), a firefighter/paramedic trying to continue her work despite the dystopian chaos New York City has been plunged into after a pandemic outbreak. Meanwhile her sister, Johanna (Shannon Woodward), is a US Army veteran who has been recruited by the Cleaners, a collection of people who decide to take matters into their own hands following the biological attack. Germant emerges as Hill, a new recruit for the Strategic Homeland Division, as the storyline revolves around the battle between the two sisters as they fight an internal war over what is more important, family or their duties in this scary new world.

Germant was excited to step into the beloved universe created by Tom Clancy and directed by KC Wayland, explaining “KC had a double job to do; reading with the actors while simultaneously directing them. He did both effortlessly and made me look good. He knows how to direct actors and create a safe, fun and creative environment.”

Up next, Germant will appear in the highly-anticipated Netflix limited series, Monster: The Jeffrey Dahmer Story, from co-creators Ryan Murphy and Ian Brennan. The story chronicles one of the most notorious serial killers in America, told from the perspective of the victims and revealing the police incompetency allowing Dahmer to go on the multiyear killing spree.

Germant has been building a solid reputation as both an actor and creator. He has appeared on several popular CW series, including Supernatural, DC’s Legends of Tomorrow, and Arrow. His credits also include Syfy series Continuum and TV movie High Moon from Bryan Fuller. In addition, Germant has appeared in numerous notable short films, including Caught in the Spokes, earning him multiple Best Actor awards on the festival circuit. This rising talent also co-wrote, co-produced and starred in, Legally Speaking, which screened globally at festivals in Berlin, Spain and the Cannes Film Festival’s Short Film Corner.

Currently based in Los Angeles, Germant was born in Moscow and grew up in Montreal. He went on to earn his B.A. in Language from Concordia University, and speaks Russian, French, Hebrew and Spanish. Setting his sights on the entertainment industry, he graduated from Vancouver Film School and then continued to study with renowned Canadian acting coach Mel Tuck. More recently, the two have teamed-up to write a feature film script, telling a post-coming of age story about growing up and finding one’s path.