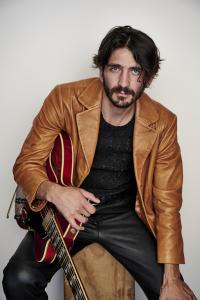 BEVERLY HILLS, CALIFORNIA, UNITED STATES, May 26, 2021 /EINPresswire.com/ — Actor and director Levi Lobo is pleased to announce the upcoming release of his new album ‘Nowadays,’ which is accompanied by a music video for the track ‘Almost Home.’ The album will be available on all major streaming platforms, including Spotify, where it can be pre-ordered, Apple Music, YouTube, Amazon and Pandora.

Lobo, the founder of Era Publishing, wrote the songs over the last decade as a tribute to his late father, Gerald Donald Martinez, a pastor who dedicated his life to helping disadvantaged communities in Albuquerque. Having lived homeless for many years, the songs are a deep reflection of Lobo’s experiences; experiences which he says he needed to process:

“These are songs I wrote when I was younger. I wrote them because I had to; I was processing the loss of my father. My writing looks at fatherlessness and homelessness in society as a whole, as a result of my personal experiences. “

“The song encompasses 13 years of life, death and the coming of age. This song brings me home.”

Lobo believes that every person has the ability to rise up out of poverty and destruction and find their value and calling, and hopes that the album will inspire people to look at large scale issues such as fatherlessness and homelessness.

For more information about Levi Lobo, click here. Samples of the songs may be heard here.

Founded in the streets of Beverly Hills when Levi Lobo decided to leave Fox Studios to start creating content that was important, Era Publishing advocates for community involvement in solving the ‘unsolvable’ issues and hardships in society.

Striving to give value and equal rights to people of all backgrounds, especially indigenous peoples, Era is on a mission to bring marginalized stories of cultural and societal importance to light by calling to those without hope.