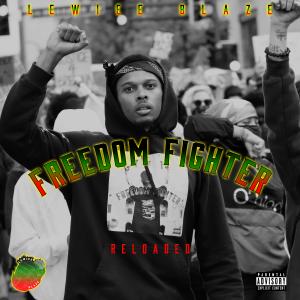 MINNEAPOLIS, MINNESOTA, UNITED STATES, June 9, 2021 /EINPresswire.com/ — Championing the rights of historically-marginalized Black community of the United States of America, Lewiee Blaze’s ‘Freedom Fighter Reloaded’ was released on March 8th, 2021. The release of this revolutionary 21-track album coincided with the date of the infamous Derek Chauvin Trial, making the message encapsulated within the songs of the album even more relevant.

However, the scope of Lewiee Blazes’s album ‘Freedom Fighter Reloaded’ is not just limited to retelling tales of age-old injustices against Black Americans in the USA. Blaze has sought to inspire his fellow Black Americans to own their stories and undo the systems of oppression that plague society. The 23-year old artist has weaponized his cunning sense of music and used it as a tool meant to play his part in dismantling the framework against Black Americans. In ‘Freedom Fighter Reloaded,’ Blaze goes beyond discussing police brutality and touches upon gun-violence, family separation, mass incarceration, and generational trauma, resulting in a cohesive critique of the USA’s failed justice system.

Lewiee Blaze’s mastery over words and distinct musical expertise has enabled him to deal with the difficult yet urgent issue of systemic racism deftly and tastefully. By using classic hip-hop sounds and poetry, Lewiee Blaze has brought his Minnesota activism to life and strengthened the message of power, hope, and justice ‘Freedom Fighter Reloaded’ seeks to impart on the world.

A staunch believer in the power of community, Lewiee Blaze sends a strong message about solidarity through his latest album. By promoting ideals of self-determination he strives to unite the Black community. Blaze was inspired and motivated by the mass protests that originated from within his hometown, Minneapolis, a year earlier and has channeled his feelings of hope into ‘Freedom Fighter Reloaded’.

Check out and learn more about Lewiee Blaze on the links below and/or reach out via the contact information for interviews, collaborations, or promotional access.

Lewiee Blaze, originally Lewis McCaleb, is an emerging musical artist, entrepreneur, activist, and community educator hailing from Twin Cities, Minnesota. Releasing songs since his teenage years, Lewiee Blaze makes use of his distinct musical sense to weave together meaningful lyrics. Even though Blaze has travelled across the country and worked with large names in the music and arts industry, he remains committed to his local community. A dauntless activist and community organizer, Lewiee Blaze uses his art to positively transform the world.