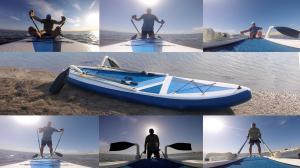 The New Paddle System turns a paddle board into a water workout machine.

CORPUS CHRISTI, TX, UNITED STATES, October 12, 2021 /EINPresswire.com/ — Supski announces the launching of its Indiegogo crowdfunding campaign for the Supski Paddle System starting today and continuing for sixty days. Elements of cable pulling, rowing and cross country skiing are incorporated into the patented design. Six different positions are used to create eighteen different exercises all while being out on the water. In addition, an optional sliding seat attaches to the board to mirror sculling with the added benefit of rowing while facing forward. Backers can save 25% off any Supski product during the course of the campaign.

The inventor, Guy Chaifetz, believes his invention opens up a new way of training. He thinks indoor machines are great exercise but they don’t provide the user with another necessary element for good health and that is being outdoors in the sunshine. Being on the water makes it even better. The original design was created as a summer workout replacement for cross country skiers. As the design evolved where it became possible to power the board while kneeling and sitting, the concept of a more diverse water workout was born.

Chaifetz believes his invention serves other markets besides cross country skiers, rowers and cable pullers. He believes para-athletes will find his invention challenging and rewarding as well. With the success of his campaign, he plans on hosting the Supski Challenge paddle board races in Aug. of 2022 where any purchaser of his board and paddle system during the campaign will automatically be entered to compete. There will be a para-athlete division at the races. Cash prizes and awards for all divisions.

Supski continues its work on next generation products which Mr. Chaifetz hopes to bring to the market following a successful product launch campaign.
Anyone interested in becoming an affiliate marketer for the Supski should go to Kickbooster.