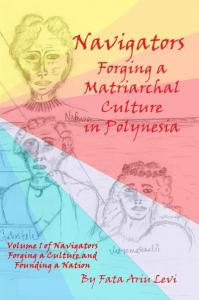 Salem Multicultural Institute World Beat celebrates the launching of Navigators Forging a Matriarchal Culture in Polynesia, published October 20, 2021, the first part of author Fata Ariu Levi’s two-volume second book: Navigators Forging a Culture and Founding a Nation—a treatise on the Navigators of the Archipelago’s intrepid migration and settlement of Polynesia from the Neolithic period onward. The author chronicles the evolutionary development of the matriarchal culture of Polynesian Samoans and Manu’ans that has sustained them for over three thousand years.

“The telling of this story aims to satisfy the curiosity of minds inquisitive about cultural development. In so doing it delineates individual identity and responsibility, and defines the importance of gender rights and leadership, cultural identity, and diversity,” wrote the Orator Chief author.

“The challenge for multicultural diversity is the lack of examples of how we, in real life, balance the differences in cultures to achieve a cohesive and collective identity. Fata Ariu has penned an example from a far remote Island Nation that sheds guiding lights to alternative praxis perspectives to parallel more global giant cultures of the world struggling with more complex intricacies of diverse society,” says Kathleen Fish Director of Salem Multicultural Institute-World Beat.

“An extraordinary endeavor that is holistic in its embrace with narrative that resonates with the pulse of familiarity like the distant sound of the surf when one holds a conch shell to one’s ear despite being miles from the shore”—Papali’i Dr. Failautusi Avegalio.

In a career spanning over 40 years, Fata Ariu Levi, is a financial service information technology transformation serial entrepreneur. With several accomplished startup initiatives in Israel and China, Ariu Levi, as he is known in business, is semiretired and is still active in investments and advisers to variety of enterprises, both for profit and philanthropic organizations.

Dedication:
The Book Navigators Forging a Culture and Founding a Nation (Volumes I and II) is dedicated to the First Female Prime Minister of the The Independent Island Nation of Samoa: Hon. Fiame Naomi Mata’afa.