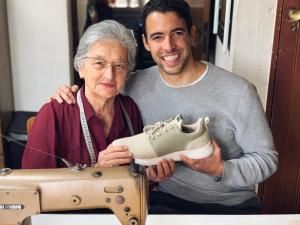 After its successful Kickstarter campaign, 8000Kicks has been experiencing big spikes in demand leading to repetitive product sellouts.

Hemp is not only a cool material, but it is also way better for the planet when compared to cotton or polyester and that’s why the product has been selling this fast.”
— Bernardo Carreira – CEO

MOUNTAIN VIEW, CA, UNITED STATES, September 13, 2021 /EINPresswire.com/ — 8000Kicks developed and launched the world’s 1st waterproof hemp shoes. Everything started with a crowdfunding campaign in 2019 that later moved to the company website in 2020, and in over a year and a half they have sold out 4 times. The longest period they stayed sold out was in the summer of 2020, where they had such a demand it took them 5 months to catch up.

WHY IS THE PRODUCT SELLING OUT?
“I guess people like hemp”. says Bernardo, the founder.The initial 8000Kicks (previously DopeKicks) took almost a year to manufacture. The team set a pretty ambitious vision to create “the coolest kicks, that are eco-friendly, super resistant and waterproof. The goal was to make a shoe that outperforms all other shoes in every category” added Bernardo once again.

The project got great early traction as it started out by raising 250k in a Kickstarter campaign. As the product moved from pre-sale to actual sale, the project got extra demand and there was simply not enough product in stock “When we first launched in early 2020, it took us 1 month to run out of shoes, and after that almost 5 months to bring them back. It was wild. ” Says again Bernardo, the CEO.

THE PRODUCTION BOTTLENECKS
According to the team, one of the big challenges for making such an innovative product is to actually source the materials, which might take up to half a year. That means the team cannot adjust to spikes in demand, and everything has to be planned a long time before it actually happens.

According to Otilia, Bernardo’s grandmother and co-founder which specializes in the textile part, “The textile part and the hemp sourcing is the most challenging because hemp crops are harvested only in the summer, then our suppliers need to process the fiber, spin the yarn, woven the fabric to our specific requirements, and only then we are ready to make the shoes”.
Not only hemp, but COVID proved to be a big challenge as well. During the early days of the pandemic, most factories ceased activity and the shoe startup had no choice but to start opening new factories. Currently, hemp is sourced from Romania, Netherlands, France, Canada and China, while the final production and assembly is done in 2 factories, one in Portugal and another one in China.

WHAT MAKES THESE SHOES SPECIAL?
According to the founders, the shoe features are directly related to their selection of materials, most precisely to the fact that they use hemp and algae. The main features of the shoe include:
>>Super Durable –> Hemp was once used to make ropes, ship sails, and even some of Ford’s cars.
>>Super comfortable –> the shoes feature the world’s 1st hemp insole.
>>Ecological–> because they use a hemp upper instead of cotton/polyester, the shoe fibers need 70% less water and emits 72% less CO2
>>Vegan and biodegradable –> the shoe is made from vegetal fibers only, including its glue that is made from water.
>>Waterproof –> a double layer consisting of a waterproof membrane plus a coating that protects all liquids from coming in.
>>Anti-bacterial and anti-microbial  –> a natural properly of hemp fiber
>>Lightweight and flexible–> a unique algae outsole that makes the shoes lighter than a phone.

In recent years, Hemp’s recognition has been growing for its amazing natural properties. As more and more people are dropping the stigma and following the hemp potential. The team hopes their inspiring story and success can attract more hemp investment because the better the quality of the fiber, the better the products, ultimately benefiting the environment as well.
Although the shoes are sold out now, the team aims to relaunch in a few weeks on September 30th, for $129 (approx. 110€), selling exclusively on their website: http://8000Kicks.com. In the meantime, can join the waiting list for 10% off.