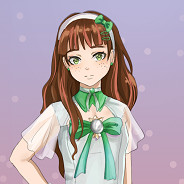 This visual novel, called 4 Alice Magical Autistic Girls, possesses both Anime and Semi-Realism art. It will be voiced entirely in French. Its plot contains magical girls, references to anime / video games and a diverse cast of heroines all named Alice.

“My name is Alice Lorange. Yes, like an orange. I’m a 16-year-old from Quebec. As I continue to walk to my high school, my red hair, wavy and stopping at mid-back, seems to rise in rhythm with my steps. It makes me feel like I’m doing a weird dance. Yet I remain focused. My green eyes are fixed on the objective. I have to get to school on time.”
Alice Lorange thinks her life is difficult because of the “Others” but when she finds herself in a strange house, it will be the least of her worries.

4 Alice Magical Autistic Girls will be released on the Steam Store for PC. It will also get Steam Achievements. The art in-game will be at 4K – 3840×2160. The story may also end dramatically with the Premeture (and deadly!) Ends. It also includes a “New Game +” mode with time anomaly shenanigans.

You may wishlist the game here: https://store.steampowered.com/app/1684120/4_Alice_Magical_Autistic_Girls/
The more people wishlist the visual novel, the more visibility and popularity it will get.