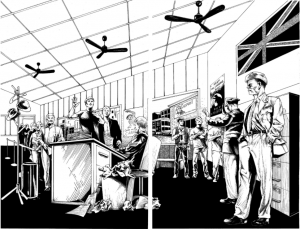 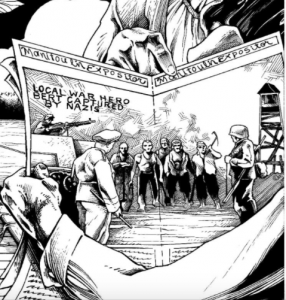 Johnny Recruit is full of emotion, energy and it’s lots of fun. This is an exciting project, an excellent story from a very talented team.”
— Harry Markos, Publisher of Markosia

Set in wartime Canada, England and Germany in 1941, Johnny Recruit is a story about hope, heroics and youthful ambition. When 14-year-old Big Johnny learns his uncle’s been captured by Nazis during a WW2 air battle, he’s sure only one person can rescue his mentor – himself. Stellar bush pilot and expert game hunter, Johnny lies about his age and joins the fight in Europe to find his best friend.

Publisher Harry Markos had no hesitation signing the young boy to a book deal.

“Markosia is all about offering great comics that explore new ideas and concepts from creators everywhere,” says Markos. “Johnny Recruit is full of emotion, energy and lots of fun. This is an exciting project, an excellent story from a very talented team.”

Both the writer and artist are fascinated by 20th century war – and soon after meeting discovered they each had a great uncle named Bert who fought in WWII: Theo’s was a distinguished Canadian RAF flying ace whilst Tom’s a heroic soldier who spent three years in a German POW camp.

“We all have great relatives in our family trees, people who’ve lived amazing lives and done amazing things, says Behe. “My great uncle Bert was one of them. He shot down lots of enemy planes – even got shot down himself. He has made our family proud. So I wanted to write some fun adventures around him – create some new characters and heroes that might match up to what he did.”

Their approach of inking a retro WW2 comic in a black and white double page scenic spread fits nicely with the overall vibe of story.

“I love the challenge of having no words and single landscape panels to tell this story,” says Canadian artist Tom Muzzell who’s been creating comics for over 40 years. “There’s lots of detail in the script, plenty going on each page – so lots of planning needed. And I love the story – this book would be on my shelf even if I wasn’t working on it.”

“I like to read pretty much everything – comics, novels, history books, Insta posts,” says Behe. “Now my friend Tom is making my story into these amazing comic pages – they’re turning out great and just the way I imagined.”