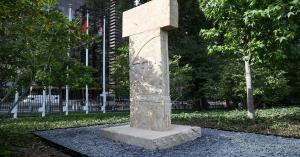 REPLICA OF 12,000 years old GÖBEKLİTEPE monument is at the United Nations 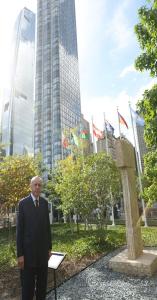 Mr. Recep Tayyip Erdoğan, the President of Turkey in front of the Ancient Monument’s Replica

NEW YORK, NY, USA, September 28, 2021 /EINPresswire.com/ — During their visit to the United Nations last week, the Turkish President and Tourism Ministry introduced a replica of an ancient GÖBEKLİTEPE monument in the Garden of the United Nations permanently for public exhibition.

Göbeklitepe, also known as “ZERO POINT IN TIME” was discovered in 1963 during a survey conducted in partnership with the University of Istanbul and the University of Chicago. It is a Neolithic archaeological site near the city of Şanlıurfa in Southeastern Anatolia, Turkey. Dated to the Pre-Pottery Neolithic, between 9500 and 8000 BCE, the site comprises several large circular structures supported by massive stone pillars – the world’s oldest known megaliths.

Göbeklitepe settlement, one of the most important discoveries of human history, started about 12,000 years ago and lasted for nearly 1500 years. It is thought that the circular designed structures, around 20 meters in diameter, were built for ritual activities to bring people together. The site’s original excavator, German archaeologist Klaus Schmidt, described it as the “world’s first temple”: a sanctuary used by groups of nomadic hunter-gatherers from a wide area, with few to no permanent inhabitants.

The 5.5-meter-high T-shaped P18 obelisk located as the central obelisk at the structure D depicts a man similar to other obelisks in Göbeklitepe.

There are no limbs such as ears, nose, and eyes on the obelisk, but the hand and arm reliefs on it are proof that the descriptions are of humans.

Hand and finger details are delicately made on the front surface. There is a fox at the fold of the left arm. On the pedestal, there are seven winged animal (probably wild duck) motifs.

There are also depictions in the form of pictures and symbols on the obelisk. Notably, the “sun and moon” interpretation is put forward regarding the circle and crescent symbols.

The 3 meters long, 1,800 kg replica was sculpted by scaling the original artifact by half.

The replica is made of limestone, known as the “Şanlıurfa Stone” in the region, as are all the pillars in Göbeklitepe.

The replica was sculpted by Archaeologist and Sculptor Ahmet DEMİRTAŞ, who is also from Şanlıurfa, and his team at Demirtaş Atelier in Istanbul.

For more information on the settlement visit us at https://www.ktb.gov.tr/