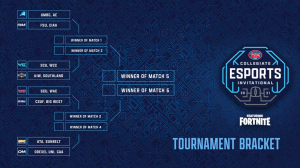 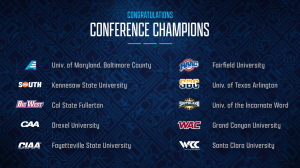 Each conference champion won $500 to earn their spot in the Championship today. The winner will take home bragging rights, $5,000 and the lion share of the $10,000 prize pool from Jersey Mike’s Subs, and products from Razer, the official peripheral partner.

Schools compete for $10,000 prize pool during invitational dubbed as “Where Conference Champions Are Crowned”

LOS ANGELES (May 27, 2021) – The Collegiate Esports Invitational Championship featuring Fortnite presented by Jersey Mike’s Subs will be held on May 27, 2021 at 6 pm EDT with schools who competed across 10 NCAA Conference Championships. Produced by GCN, Inc. (Gaming Community Network), part of the GameSquare Esports group of companies, is an independent media group dedicated gaming and esports, and Van Wagner, the Collegiate Esports Invitational series, billed as “Where Conference Champions Are Crowned,” is the first major collegiate esports event that brings colleges and universities together across disparate conferences to compete to become a national champion.

More than 75,000 fans viewed the 10 conference championships which were streamed live on twitch.tv/CollegiateEsportsInv. The tournament was also carried by GCN across 85+ gaming and esports centric websites where GCN reaches 65M+ monthly uniques in the U.S.

Each conference champion won $500 to earn their spot in the Championship today. The winner will take home not only bragging rights, but $5,000 and the lion share of the $10,000 prize pool from Jersey Mike’s Subs. They will also receive products from Razer, the official peripheral partner. The teams in the Championship punched their ticket after winning their respective conference tournaments on May 22.

This was the first of the Collegiate Esports Invitational series that will continue this fall with two other tournaments. More information regarding registration and additional details will be disclosed this summer.

About Van Wagner:
Van Wagner is a wholly owned subsidiary of Van Wagner Group LLC that creates, advises, and sells on behalf of world-class teams, leagues, brands, properties, and colleges. An innovator in the sports and media business, Van Wagner is a global leader in high-impact broadcast visible signage throughout the MLB, NBA, NCAA, and the highest levels of international soccer, sponsorships sales, premium ticketing, college multi-media rights, and in-venue content production at the world’s biggest sporting events. www.vanwagner.com